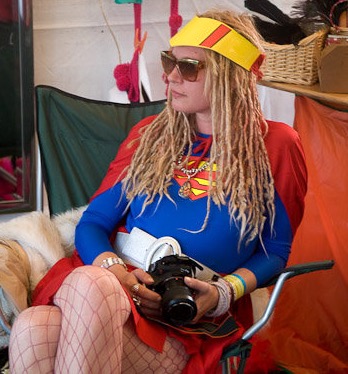 Rockstar Yoga Party (Yogi Party) Or AKA Miss Cake is Doing what was in the past impossible!

Through surgery and then Yoga, I have healed my body so I am able to do things that were never possible for me to do before.

I suffered from a child until the age of 32 with chronic pain due to a form of hip dysplasia. At 32 I had major surgery on my hip, with many smaller operations after, until in 2017 I started training as a Yoga Teacher.

Due to my hip pain, referred pain, back pain and all the problems that occur due to always over compensating, I was never able to do much exercise at all, it got to the point by the time I was 32 that even going out for a night and dancing was near impossible, and I would sit at the side of the dance floor watching people and wasn’t able to join in with any physical activities hardly at all. If I did I would suffer for weeks or months after. It became normal, living in pain.

Then along came the amazing NHS doctors at the UCLH in London, and my own personal Angel and Surgeon Mr Witt. He performed a PAO (periacetabular osteotomy) where my hip sockets were too small and in the wrong position, during a PAO, the pelvis is chopped in 3 places, rotated put into a new position, then pinned into place. The operation was about 4 hours long, I was in hospital for a week after.

I was non weight bearing and on crutches for 3 months after, laying in bed watching sci-fi all summer, then it was about 18 months of recovery and rehabilitation before I was completely back on my feet. I still suffered with hip pain for quite a few years after this operation, so I had 3 more smaller operations via keyhole surgery, to remove labral tears (soft tissue in between the hip sockets) and had small parts of the pelvis bone ground off, as parts were protruding. I also had the 4 pins removed successfully with no parts breaking off, these pins are normally left in, but they were sticking out of my skin and always getting in the way.

So after all this, I started learning yoga, on my own, at home from books, going to a few classes every now and then, but it was sheer determination and then a close friend suggesting I should do a course with this amazing woman Nicole Aarons. I had not intended on doing the 500 hour Yoga Teacher Training course which I am now qualified with, only the 200 hour course, but Nicole had decided not to run the 200 hour anymore. So I went straight into an intensive 500 hour course over 13 months. It was the best, and the hardest decision of my life.

The start time of the course was delayed many times, over a year and a half, which in universal time-space synchronicity, fitted perfectly into my then still current and ongoing rehabilitation and extra time to get fit, stronger and learn more yoga. During which time I also had my last small hip operation. I was so nervous that the course would eventually start too soon after that last recent operation, that I was worried I wouldn’t be fit enough to do the course. The many delayed starts to the course actually was a gift from the heavens!

I had mainly decided to do the Yoga Teacher Training as intensive rehabilitation for myself, but after starting the course I had this really strong desire to help others like me, who may have injury or are recovering from surgery or illness. And that stays with me today, 4 years after starting my journey with yoga.

I have been a teacher for 14 years now, teaching Computer Skills, Web Design, Digital Media Arts and ESOL, I knew it was time to get away from the computer, and to get even more healthy after being given this second chance at life. Having struggled with constant pain, trying everything in the book to heal or fix or dumb down the pain that I had suffered since as far back as I can remember, my first memories being 4 years old and in agony trying to sleep, to now.

I am pain free 99% of the time, I don’t need painkillers anymore, I don’t even have them in my handbag ‘just in-case’ and I actually forget all the pain I have been through sometimes. I have basically re-trained as Yoga Teacher, once you are a teacher you are always a teacher.

I wish to teach and enable others to heal and learn Yoga, just as I have, to bring our experiences into a place of forgiveness, for ones self, the world and all the hurt we feel and experience and be able to let it ALL go!

Join Me, Let’s Meet in Unity and Heal Together!

We all have the ability to fix ourselves, heal and move on, allow me to assist you in Your Healing journey <3